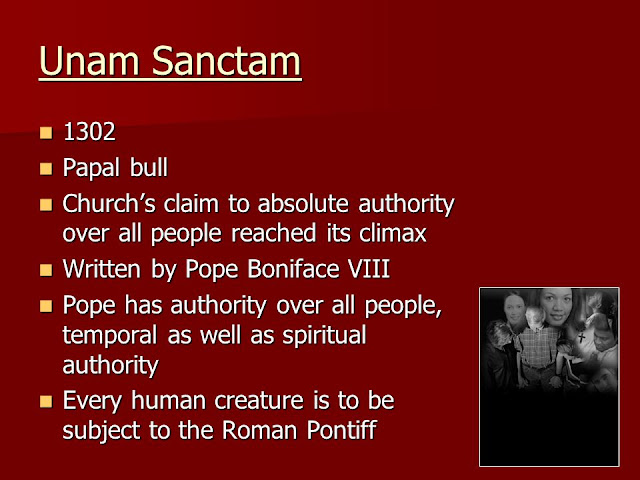 Reposted:  The Legal Ownership of All Souls by the Vatican… Since 1306!


Unam Sanctam is one of the most frightening documents of history and the one most quoted as the primary document of the popes claiming their global power. It is an express trust deed. The last line reads:  “Furthermore, we declare, we proclaim, we define that it is absolutely necessary for salvation that every human creature be subject to the Roman Pontiff.” It is not only the first trust deed in history but also the largest trust ever conceived, as it claims the whole planet and everything on it, conveyed in trust.

Triple Crown of Ba’al, aka the Papal Tiara and Triregnum

In 1302 Pope Boniface issued his infamous Papal Bull Unam Sanctam––the first Express Trust. He claimed control over the whole planet which made him “King of the world”. In celebration, he commissioned a gold-plated headdress in the shape of a pinecone, with an elaborate crown at its base. The pinecone is an ancient symbol of fertility and one traditionally associated with Ba’al as well as the Cult of Cybele.  It also represents the pineal gland in the centre of our brains––crystalline in nature–– which allows us access to Source, hence, the 13-foot tall pinecone in Vatican Square. Think about why the Pontiffs would idolize a pinecone.

The 1st Crown of Crown Land

Pope Boniface VIII
Pope Boniface VIII was the first leader in history to create the concept of a Trust, but the first Testamentary Trust, through a deed and will creating a Deceased Estate, was created by Pope Nicholas V in 1455, through the Papal Bull Romanus Pontifex. This is only one of three (3) papal bulls to include the line with the incipit “For a perpetual remembrance.” This Bull had the effect of conveying the right of use of the land as Real Property, from the Express Trust Unam Sanctam, to the control of the Pontiff and his successors in perpetuity. Hence, all land is claimed as “crown land”.  This 1st Crown is represented by the 1st Cestui Que Vie Trust, created when a child is born. It deprives us of all beneficial entitlements and rights on the land.

The 2nd Crown of the Commonwealth

The second Crown was created in 1481 with the papal bull Aeterni Regis, meaning “Eternal Crown”, by Sixtus IV, being only the 2nd of three papal bulls as deeds of testamentary trusts.
This Papal Bull created the “Crown of Aragon”, later known as the Crown of Spain, and is the highest sovereign and highest steward of all Roman Slaves subject to the rule of the Roman Pontiff. Spain lost the crown in 1604 when it was granted to King James I of England by Pope Paul V after the successful passage of the “Union of Crowns”, or Commonwealth, in 1605 after the false flag operation of the Gunpowder Plot. The Crown was finally lost by England in 1975, when it was returned to Spain and King Carlos I, where it remains to this day.  This 2nd Crown is represented by the 2nd cestui Que Vie Trust, created when a child is born and, by the sale of the birth certificate as a Bond to the private central bank of the nation, depriving us of ownership of our flesh and condemning us to perpetual servitude, as a Roman person, or slave.

The 3rd Crown of the Ecclesiastical See

The third Crown was created in 1537 by Paul III, through the papal bull Convocation, also meant to open the Council of Trent. It is the third and final testamentary deed and will of a testamentary trust, set up for the claiming of all “lost souls”, lost to the See.  The Venetians assisted in the creation of the 1st Cestui Que Vie Act of 1540, to use this papal bull as the basis of Ecclesiastical authority of Henry VIII. This Crown was secretly granted to England in the collection and “reaping” of lost souls. The Crown was lost in 1816, due to the deliberate bankruptcy of England, and granted to the Temple Bar which became known as the Crown Bar, or simply the Crown. The Bar Associations have since been responsible for administering the “reaping” of the souls of the lost and damned, including the registration and collection of Baptismal certificates representing the souls collected by the Vatican and stored in its vaults.
This 3rd Crown is represented by the 3rd Cestui Que Vie Trust, created when a child is baptized. It is the parents’ grant of the Baptismal certificate––title to the soul––to the church or Registrar. Thus, without legal title over one’s own soul, we will be denied legal standing and will be treated as things––cargo without souls––upon which the BAR is now legally able to enforce Maritime law.

A Cestui Que Vie Trust is a fictional concept. It is a Temporary Testamentary Trust, first created during the reign of Henry VIII of England through the Cestui Que Vie Act of 1540 and updated by Charles II, through the CQV Act of 1666, wherein an Estate may be effected for the Benefit of a Person presumed lost or abandoned at “sea” and therefore assumed “dead” after seven (7) years. Additional presumptions, by which such a Trust may be formed, were added in later statutes to include bankrupts, minors, incompetents, mortgages, and private companies. The original purpose of a CQV Trust was to form a temporary Estate for the benefit of another because some event, state of affairs, or condition prevented them from claiming their status as living, competent, and present, before a competent authority. Therefore, any claims, history, statutes, or arguments that deviate in terms of the origin and function of a CQV Trust, as pronounced by these canons, is false and automatically null and void.
A Beneficiary under Estate may be either a Beneficiary or a CQV Trust. When a Beneficiary loses direct benefit of any Property of the higher Estate placed in a CQV Trust on his behalf, he do not “own” the CQV Trust; he is only the beneficiary of what the Trustees of the CQV Trust choose to provide.  As all CQV Trusts are created on presumption, based upon original purpose and function, such a Trust cannot be created if these presumptions can be proven not to exist.


Since 1933, when a child is borne in a State (Estate) under inferior Roman law, three (3) Cestui Que (Vie) Trusts are created upon certain presumptions specifically designed to deny, forever, the child any rights of Real Property, any Rights to be free, and any Rights to be known as man or woman, rather than a creature or animal, by claiming and possessing their Soul or Spirit.

The Executors or Administrators of the higher Estate willingly and knowingly:

What is the real power of a court ‘judge’?

Given what has been revealed about the foundations of Roman Law, what is the real hidden power of a judge when we face court?  Is it their superior knowledge of process and procedure or of magic? Or is it something simpler and far more obvious?
It is unfortunate that much of the excitement about Estates and Executors has deliberately not revealed that an Estate, by definition, has to belong to a Trust––to be specific, a Testamentary Trust or CQV Trust. When we receive legal paper or have to appear in court, it is these same CQV Trusts which have our rights converted into the property contained within them. Instead of being the Trustee, or the Executor, or Administrator, we are merely the Beneficiary of each CQV Trust, granted only beneficial and equitable use of certain property, never legal title. So if the Roman Legal System assumes we are merely the beneficiary of these CQV Trusts, when we go to court, who represents the Trustee and Office of Executor? We all know that all cases are based upon the judge’s discretion which often defies procedures, statutes, and maxims of law. Well, they are doing what any Trustee or Executor, administering a trust in the presence of the beneficiary, can do under Roman Law and all the statutes, maxims, and procedures are really for show because under the principles of Trust Law, as first formed by the Roman Cult, a Trustee has a wide latitude, including the ability to correct any procedural mistakes, by obtaining the implied or tacit consent of the beneficiary, to obviate any mistakes. The judge is the real and legal Name. The judge is the trust, itself. We are the mirror image to them––the ghost––the dead. It is high sorcery, trickery, and subterfuge that has remained “legal” for far too long. Spread the word.
Original source: Stop the Pirates
Via: TABU
Posted by BronnyNZ at 16:22

BronnyNZ
Lund, Skåne, Sweden
Blogger since 2012. I am a researcher, academic, journalist, gardener, musician, poet, visionary, and reader of the "Ringing Cedars of Russia" books. From Aotearoa-New Zealand. I lived in Lund, Sweden 2018-2021. A huge change in Earth's social history is happening before our eyes. On my blogs, find out what the globalist power brokers have been up to. Thank you, BronnyNZ