"Getting Started" # 4 - Earlier Posts on This Blog

This new blog site hopefully will provide some guidance to a new-comer like myself. It will give you a starting-point and provide some history and nuts and bolts of what has been going on behind the scenes since 2009. This is an amazing story. I am no expert either... very few of us are. But as we help each other and contribute to each other's understanding, we will get there.

To be honest, the Press Release looked to me like a mish-mash of New Age optimism mingled in with indecipherable legalese. I put it away in the corner of my mind until after Christmas/ New Year, dismissing it as yet "another" well-intended attempt at rattling the Powers That Be...

What does OPPT say about itself ??

What is the One People’s Public Trust?

The One People’s Public Trust itself consists of every person on the planet, the planet itselfand the Creator. The One People’s Public Trust trustees are a talented group of very skilled individuals including legal professionals who, in conjunction with a positive group inside the financial system, carried out extensive investigations into the massive fraud and theft taking place at the time. 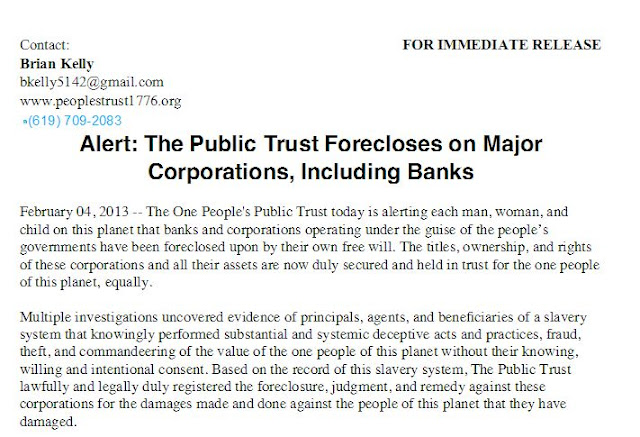