Here is some interesting Maritime and other symbolism that still exists in the 21st century court room.... I thought many people might be interested in 'the spirit' of the court room: 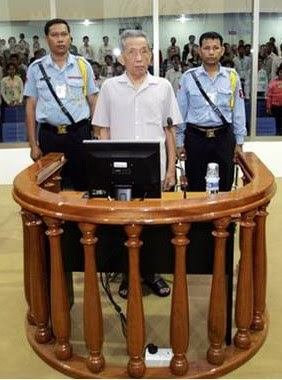 (1) "The Dock" in the courtroom is where you tie your "ship" (your person, your body), ie: where you are required to give account of what's on your 'Manifest' or 'Berth Certificate' which is the fictitious representation of yourself, ie: where you give account for offences allegedly committed

(2) "The Bar" to which your lawyer has sworn his/ her service is Temple Bar in the City of London. It's the delineating line that separates Westminster and the City of London. People were taken into "The City" (the Templar/ Masonic citadel - fortress, protectorate), to be tried, tortured, and hung but often not to the point of death, and often, were cut into four pieces as a part of the execution... "Hung, drawn and quartered." This sentence was handed down to prisoners right up until 1870 in London... as written about by Charles Dickens, as seen with his own eyes (Victorian writer).

(3) "The Bench" where the judge now sits was the bench where men (generally) would be stripped to the waist, be laid out face down over the bench, and whipped to the point of death. Other tortures were also meted out at 'the bench'. It's the place of punishment. The tortures included flaying of a man's chest with a sharp scalpel-like knife while the man was living. These tortures/ punishments/ sentences were a public spectacle. People gathered to watch these events in the large open forum or 'gallery' - the place where the 'pictures' or 'snapshots' of torture could be openly viewed by the public... and by the approving clergy. All of these things took place in front of the Templar church, where all manner of blood-letting and atrocities were authorised 'in law'. This is That to which your lawyer has sworn, when he/ she swore to "The Bar"

(4) "The Well" is the space between where the defendant sits with his/ her lawyer, and 'the bench'. No one is to approach the judge across The Well, unless they request to 'approach the bench'. Why is this ?? This place in 1666 was 'The Wiel', ie: the place where the whips were wielded. Blood dripped from the ripped open bodies laying across 'the bench' being whipped, or blood gushed out in a flood as the innards of the living man was torn from his body and burned in a fire in front of his open eyes, as per his sentence, recorded by Dickens... "What the Dickens!" No body would want to cross the wiel... not in a million years.

This and these other traditions are still observed by token, and kept in the modern court room to this day. It's freakin' horrific !! These are the traditions upon which our Judicial System sits. Please also note: a 'jury-mast' was a defacto temporary mast raised in a ship in the event that the original one was broken for any reason... It was known as 'the assistant' or 'helper'.

The word 'jury' comes from the word "to swear", with an implied meaning that it is "to swear to something that is false". We have trials "by jury" or in the Latin literal translation, "per jury". Please also note that trials are to remedy "in-jury" or for our purposes, "IN-jury". Now there's a real brain-twister for the scholarly !!  It begs the question, "What REALLY is injury?" Is "injury" (in word, in intent, and in spirit) actually a HOAX that we all collectively decided to play ??  I prefer the word "harm" which has no convoluted meanings (from Germanic, Nordic, Frisian) to the word "injury" - derived from the corrupted, conniving words of the Romans. 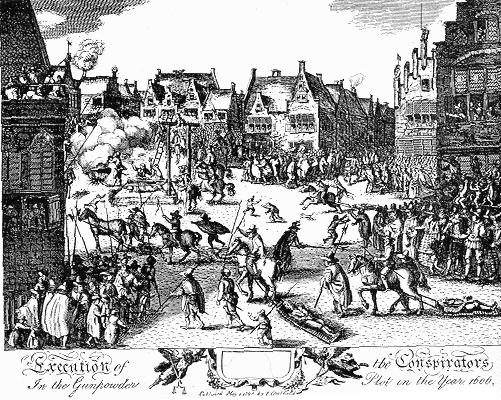 
See the maps below:

This is where 'it all' went on... Please note the locations of 'Temple Bar' and 'The Temple', of the close proximity to 'Chancery Lane', to Fleet Prison, Newgate Prison and "Ludgate" where there was also a prison. Tyburn was the location of the 'Tyburn Tree'. This was a killing ground, where multiple hangings simultaneously could be carried out. In this 21st century, archaeologist have dug up mass graves, not only in the general vicinity of Tyburn, but also, all down Oxford Street. MASS GRAVES FULL OF BONES !!! The Killing Fields of London.This is a very sad legacy indeed for the City of London to leave populations of Earth - so many look to London for so much...

Please compare the 17th Century London Map below with the 400AD Map of Londinium, particularly the features in the western parts of the city...  the fort, the temple, the cemetery and the amphitheatre, as well as the general street layouts.  I think we can learn quite a lot about the 'spirit' that hovered around these places since Roman times, in a quiet reflective study of these two maps...  Enjoy. 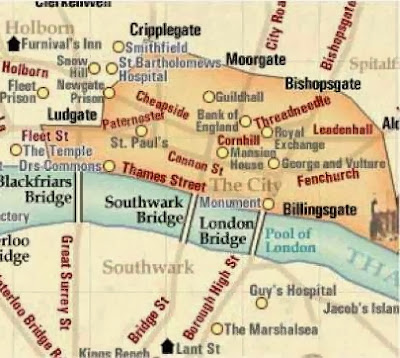 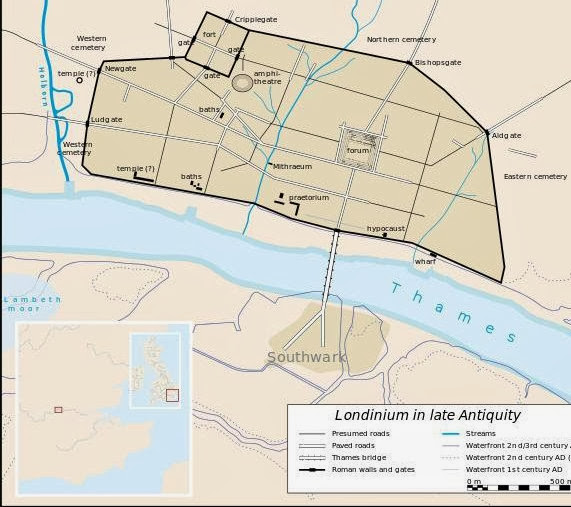 Source
Posted by BronnyNZ at 07:01