Why the whole banking system is a scam - Godfrey Bloom MEP

"ALL the banks are broke... because we have a system called Fractional Reserve Banking..."

Fractional reserve banking - Banks can lend money that they don't actually have. It's a criminal scandal, it's been going on for too long.

Counterfeiting - 'Quantative easing', ie: the artificial printing of money... If any ordinary person did this, they'd go to prison for a very long time.

Central Banks repress the amount that interest rates are so we don't have the 'real cost' of money, and yet we blame the retail banks for manipulating LIBOR.

Deposit guarantees - When the banks go broke through their own incompetence and chicanery, the taxpayer picks up the tab. It's THEFT from the taxpayer.

Until we start sending the Bankers including the Central Bankers and the Politicians to prison, the problem will continue !! 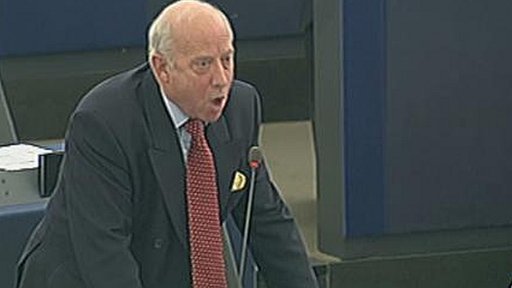 God... Why doesn't this man get a standing ovation !! rather than a pitiful speckling of reluctant applause ?? Bring him to NZ. We'd bring the house down with applause if he came down here and gave this same speech !! : )